Mold in Basement: Here’s How We Got Rid Of It (The Safe Way) 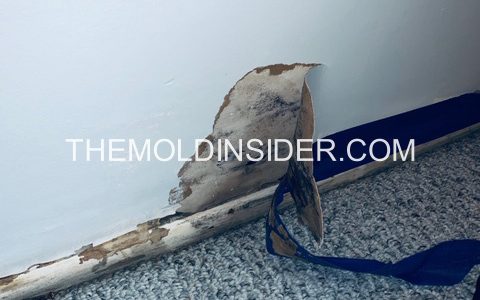 The issue of mold growth in basement areas is a problem that many homeowners face frequently.

Often this issue can go unnoticed until it becomes a larger issue to handle.

If you have mold growth in your basement, it can be very damaging to your home. So you need to act quickly to protect yourself, your family, and your home’s value.

In this post we will share how a simple spot on a wall can sometimes hide a larger mold problem.

Finding The Mold in Basement

In this case, we were called to perform a mold assessment in the basement area of a home. The homeowner complained about musty odors and discoloration on the bedroom wall in the basement.

There was discoloration on the lower section of the drywall just above the baseboard.

On closer observation, we noticed that the drywall was deteriorating, and the layer of paint covering was peeling. A small area was pulled back, and we noticed suspected fungal growth.

At this point, we notified the homeowner that there might be a moisture problem that may have affected certain sections of the wall covering.

Below are the steps that are taken to help the homeowner address the condition in their home.

The area was inspected; a small section of the wall covering was loose which provided a good area to see if the wall had any water damage.

To determine how much wall was affected, moisture readings were taken in the area.

The initial area that was identified for removal was a 3 foot by 3-foot section of drywall that had high moisture readings.

We began by setting up containment in the area as required when performing mold remediation projects.

The area was placed under negative pressure that exhaust to the exterior of the home.

The next step involved using the right safety gear.

Uncovering The Source Of The Mold Growth

We found that the mold growth spread from the baseboards to the ceiling of the room.

This often occurs when the area remains wet over a long period of time. The moisture saturates the material and continues to deteriorate it until the issue is properly resolved.

That’s why it is important to inspect and act quickly if you have a water intrusion, flooding or leak in your basement.

Based on our observations when the wall covering was removed, the concrete foundation wall developed a crack which allowed water to seep into the basement area during rain events.

Additionally, was seeping into the drywall because there was no moisture barrier between the basement concrete wall and the drywall or the wooden studs.

We recommended to the homeowner that they should consult with a foundation repair company to come in and address the problem or the issue would continue to return.

Actions are taken while the area was under containment:

As you can see from this project, a small section of water damage can uncover a larger issue.

That’s why its important to inspect your home frequently to identify mold growth or water damage issues before it becomes a larger problem.

Always pay special attention to moisture prone areas like bathrooms, under kitchen sinks, around dishwasher, in basement areas, and in laundry rooms.

Taking some simple steps will go a long way in preventing mold infestation and water damage in your home.